When I asked Cathie if she would let me blog about her experiences moving to her new home, I got a whole lot more than I expected. I thought I’d do perhaps three casual interviews with her and write up each as a post.

The three posts ended up being eight, as her story took more twists and turns than either of us ever imagined. And there was no interviewing involved. Cathie emailed me each post already written. I am very happy she did that because reading the updates in her voice rather than mine added so much to the story.

Now, here is the happy ending we have all been waiting for.

As I quoted in my first blog, “The best laid plans of mice and men often go astray”…and, oh boy…did they ever. When Caryl first asked me to chronicle my adventures of a cross-country move, neither of us had any idea how big an adventure this would become.

Last Monday, my lawyer called to say we were set to close on Wednesday at 11:30. I told her I’d believe it when I had keys in hand. I did nothing. I did not call movers, or tell the hotel I’d be checking out early, or make any other arrangements. I did close on my Abilene, TX, home on Monday, and all went smoothly there.

Wednesday morning I picked up my cashier’s check and headed over to the title company. Was this really going to happen this time? I signed all the paperwork and then waited for funding approval so they could give me the keys. And we waited…for 4 1/2 hours. I honestly believed for a while that I would not receive the keys and would have to return after the long weekend. But the approval finally came. 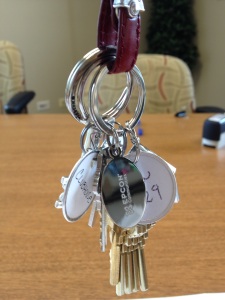 I immediately drove to my new home, and with a big grin on my face and my heart filled with so much happiness I thought it would burst, I opened my front door.

So we have come to the end of my adventure, as I received the keys on July 3 and moved into my new home on the 4th of July.

My silver lining is that every year, as I celebrate our great nation’s birthday, I will also be celebrating the anniversary of my newfound freedom in my very own home.

I want to thank all of you who followed me on my adventure (via the blog) and Caryl for providing a venue to expose the ups and downs of moving. A special thanks to Carol Lyons, Steve Downey, and Sharon Erickson (Wilcox Communities) who helped turn every crisis into something more manageable to bear.

I look forward to settling into my new community and meeting my great neighbors. For those of you considering a move to The Maples, you won’t regret it. The Wilcox family is not your average builder. They are waiting to help you make a new life in your new home at The Maples at the Sonatas. May your journey be not quite as eventful as mine.

If you came to Cathie’s story in the middle and would like to read it from the beginning, you can do that by clicking on these links.