It has been two weeks since Cathie last updated us on her purchase of a new Portico here in Maples at the Sonatas and her move from Texas. At that time, she was still in Abilene but was about to load her belongings on a truck for the move to Woodstock. When I look down my street this morning, I see her home, but Cathie still isn’t there. She explains why in this latest installment in her ever-longer saga.

Well, as I said in my last blog, my luck hasn’t been going so well. So what are the chances that there will be another glitch? Very probable…and there were several.

My husband and I made it two and a half hours out of town, to Wichita Falls, TX, before our first glitch.

A tire blew out on the U-Haul trailer we were pulling behind the U-Haul truck, the brakes seized on the truck, and something happened to the hydraulic assist and engine. U-Haul sent a mechanic from Lawton, OK, and it took 4 1/2 hours to finally get the truck and trailer to Wichita Falls, where I was waiting with my car.

U-Haul had to switch out the trailer, but they got the truck fixed and had us on the road by noon the following day. Did I mention it was 101 degrees and I had my three dogs with me in the car during this ordeal?

Back on the road

Wednesday morning my lender called to say everything was on track, and I would have closing costs soon so I could make arrangements (on the road) to get to a Chase Bank to arrange a wire transfer. I confirmed with the movers that they could off-load the truck on Friday.

We made our way to the Maples, where I met up with Caryl, and she let us into the home so my husband could see it. We left the truck in the driveway and headed for the hotel for some much needed rest.

Around 8 pm, Carol Lyons sent me a copy of an e-mail from my lender. Once again…we would not be closing. Up to now, I’ve been rolling with the punches. This time I cried.

Yet another game plan

First, I dropped my husband at the train station so he could make his own way to O’Hare. Carol Lyons came to the rescue again, arranging a release from liability so I could place my belongings in the garage. I made arrangements with another hotel to stay until July because I still have no idea when I’m closing. I finally calmed down enough to call my lender. It was their mistake and they were very sorry, but that didn’t help me.

We’re coming up on the July 4 holiday, and my divorce, with my name change, is final as of next week…just to complicate matters. No one is sure if we can make the closing happen before either of these events. On the other hand, the closing on my Abilene home is today so I had to turn my attention to coordinating paperwork with the title company. 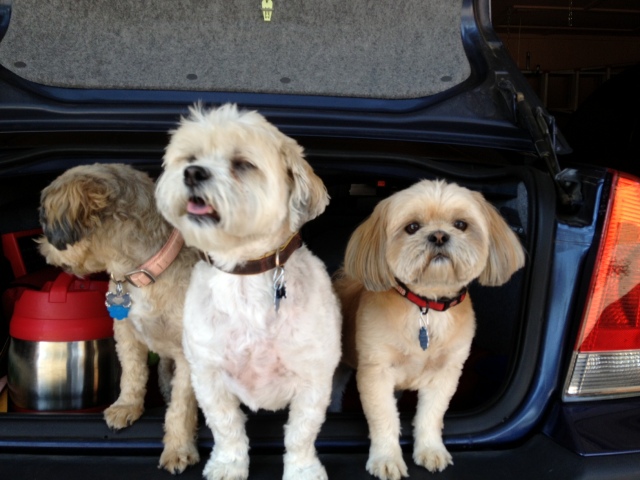 Cathie’s three dogs are living with her in a hotel room while she waits to close on her home.