To the reader: This is the last entry in a series in which I revisit earlier posts. Once again, I have chosen one that I think has something new to say in our current pandemic times.

The month of November 2015 was brutal. Do you remember why? I didn’t. So let me remind you what was going on in the world at that time.

• In Paris, a series of suicide bombings and mass shootings killed 130 people and injured another 413.

• In Mali, suicide bombers took 170 people hostage at a hotel and before it was over, killed 20 of them.

And much closer to home…

• In Chicago, riots broke out after a court forced the Chicago Police Department to release the dash cam video of the shooting of Laquan McDonald, a young black man who had been killed by an officer a year earlier. The video showed McDonald walking away from the police when he was shot and killed.

So with all of this violence and loss of life in a short period of time, why had I almost entirely forgotten it? Looking back, I think I felt the pain in the world, but I also felt very removed from it. After all, I lived in Woodstock, Illinois, where things like that didn’t happen. I was immune to the problems of the larger world.

Except, of course, I was wrong.

Now I’m living through a world crisis to which I am not immune. None of us are. COVID-19 doesn’t respect national boundaries or state lines. It doesn’t care about the size of the population of a city. It doesn’t care how safe it has felt in the past.

It was with a great sense of nostalgia that I reread the post below. To be honest, I don’t know if we will ever be able to go back to the Woodstock of 2015. But this is what it was like. We will always have that.

Far From the Maddening Crowd

I was having lunch with my 95-year-old mother. Because of her dementia and poor hearing, she misses a lot of what is going on around her. But that day she caught a bit of conversation from the booth behind her as a couple discussed the Paris attacks.

When she asked what they were talking about, I gave her the shortest, least threatening explanation I could. But it wasn’t enough to satisfy her.

She asked again—Honey, why did they do it?— before allowing me to change the subject.

It has been a terrible month of terrorism in Paris, in Mali, in Beirut, and God-knows-where-else.

It has been a terrible month of police brutality and racism and protests in Chicago.

During this terrible month, we have been warned to think twice about overseas travel, to report anything that seems out of place, to avoid large crowds.

The world has become a hostile, dangerous, frightening place. Even more so than it already was.

And then there is Woodstock, Illinois, the antithesis of Paris or Beirut or Chicago. Thank God.

On Friday night, a crowd of 2,000 people assembled in our downtown. The reason? The lighting of our town square for Christmas. 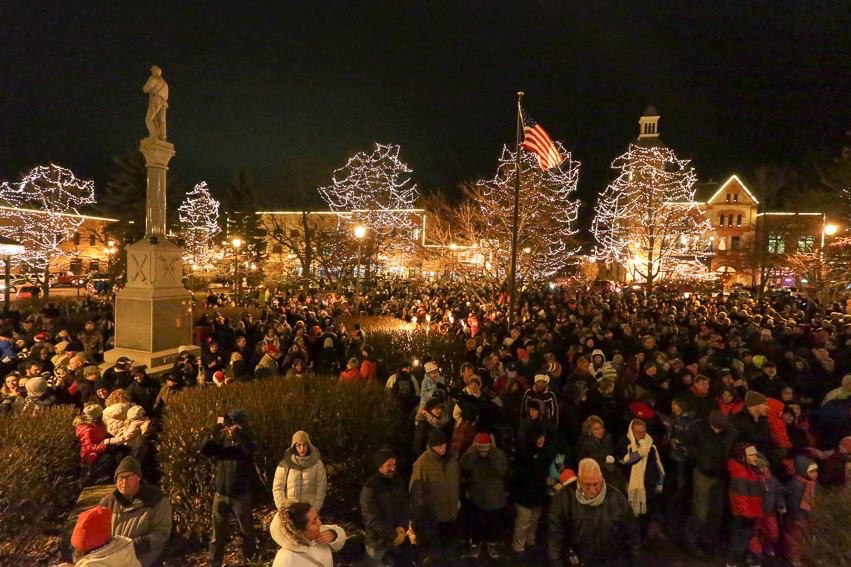 Photo by Ken Farver for The Woodstock Independent

All I can think of is how blessed we are. We can still stand shoulder to shoulder in a throng of people—many of them strangers—and still feel blissfully safe.

Is this a false sense of security? I suppose it could be.

So far, most of the tragedies have taken place in large cities or unstable foreign countries. Yet we have been told that no place is immune to terrorism’s violence and fear.

And I guess I mostly believe that— intellectually. I don’t really accept it emotionally. All I know is, I don’t want to live long enough to lose my sense of safety here at home.

That freedom from fear is denied to countless people around the world. It is a blessing I try not to take for granted any more.