It began as a 3-way chat on Messenger. It was a couple of weeks before my trip to visit Joe and Sylvia in Asheville, NC, and we were discussing plans for my stay. Sylvia and I were making decisions about places to visit and things to do. Then Joe jumped in.

Wait. A set of questions about the novel I wrote?? I took a deep breath and typed:

Yes, it turned out, that was exactly what he had in mind.

What ensued was the biggest adventure I’ve had recently.

Before we step into Studio A at 103.3 Asheville FM, here’s some background. Joe has had an interest in radio, and in being on the air, for quite a while. He also has an extensive knowledge of all kinds of music and an impressively large collection of it. Soon after moving to Asheville, he became involved with Asheville FM, which is a volunteer-based, listener-supported, grassroots community radio station. One thing led to another, until he found himself hosting his own show, Life Out of Tunes, using the DJ name of Joey Books.

If you are interested in knowing more about how Joe became a DJ, follow the link below to a post on his blog, Life Out of Tunes: Chasing a DJ Diploma.

And a little more background. The book in question is Teaching Mysteries 201: The Strike, a mystery set in 1972 that I wrote and published last year.

I had 20 days before the show. Plenty of time to prepare. Except that I didn’t prepare, other than sending Joe the interview questions, along with a list of the songs I mentioned in the novel. Why did I need to prepare? I had spoken to a number of groups about the book. I had reread it over the summer. And I would be answering questions that I had made up myself.

I arrived in Asheville a few days before the show. Once there, I was busy sightseeing, walking around the West Asheville neighborhood, drinking wine with Joe and Sylvia, and getting reacquainted with Bandit, their dog.

Suddenly it was Monday. I woke up in a panic, realizing that in a few hours I would be on the radio. I dug out a copy of the questions and skimmed it. “I don’t know the answers to any of these,” I said to Bandit, who had jumped on my bed. He gave me a quizzical, head-tilted look. Why hadn’t the retired teacher done her homework?

When we arrived at the station, Joe gave me a tour and introduced me to other staff members who happened to be there. Fortunately, we were able to get settled in the studio a few minutes before air time. I had my headphones on and had passed a quick sound check. I got out my scribbled notes and was as ready as I would ever be.

The next thing I knew, Joey was saying into his mic: “It’s 2 p.m., and you are listening to Asheville FM…” He finished his intro, then Willie Nelson was singing Vote ‘Em Out. Off the air, Joey told me he would be spinning several tunes from the early ’70s before I would be on.

So I relaxed a bit and began noticing things. Like how much Joe was doing while music was playing. He was adjusting levers and pushing buttons, looking at his detailed notes for the show, marking off items with a highlighter, locating the copy for the announcements he had to read. Sometimes he spoke briefly between songs. After they played, he gave explanations and details that most listeners wouldn’t know. 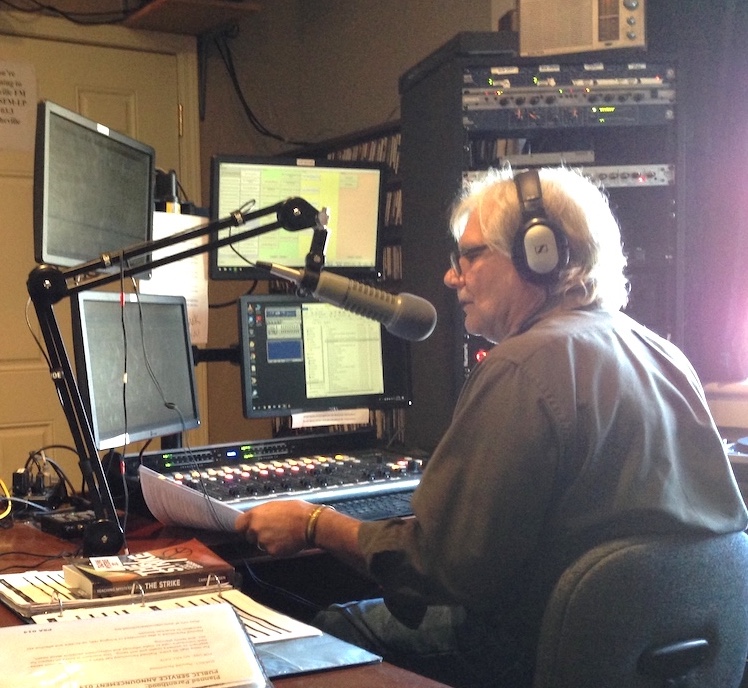 Then Sarah McLachlan began singing Building a Mystery, which Joey had (appropriately) chosen to lead into my interview. While it played, he asked me, Are you ready? I said I was, and hoped that was true.

His plan was to ask me two or three questions, then play two or three songs from the book; then we would talk more, followed by more songs. It was a great plan because it gave me breaks to collect my thoughts and to just enjoy the music.

Looking back, the only thing I clearly remember talking about is how I chose the music in the book. I needed songs to fit the story and my setting. So I had called Joe because he knew so much about music. I asked him to suggest songs that might have been playing on a jukebox in a rustic bar during the fall of 1972. He got back to me very quickly with a number of choices. They all ended up in the book.

Here’s what surprised me the most about the experience. It was the complete relaxation I felt while “my” music was playing. I could easily imagine I was with my character, Andrea, in the bar after parent-teacher conferences, while Saturday in the Park, You’re So Vain, and The Happiest Girl in the Whole U.S.A blasted from the juke box. Joey and I could take off our headsets and talk with each other and with Sylvia, who was there for moral support and to take the pictures in this post. 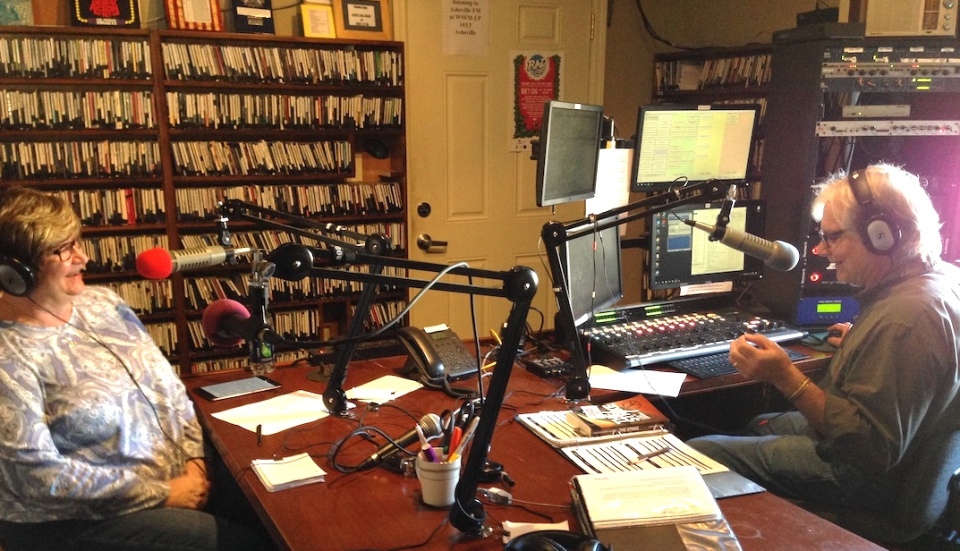 But that wasn’t my only surprise. When I sent Joe the list of songs in my book, there was one I really, really hoped to hear, though I honestly didn’t think that I would or could. Like Andrea, I had had a ritual to lift my spirits when I was feeling down. I would darken the room, light vanilla-scented candles, and play sentimental music by Rod McKuen. I hadn’t heard him since those long ago nights in my dorm room. So I assumed his recordings might not even be available anymore.

I should have known, though, that Joey would come through. When he played The Sea, and I heard it for the first time in nearly 50 years, I may have shed a nostalgic tear. And here’s another surprise. By the time the song finished playing, my nervousness had disappeared.

At that point, time sped up. Joey and I chatted some more. He played three more songs from my book—Cherish, The Sounds of Silence, and Here Comes the Sun. With that, my segment of the show was finished.

I was relieved, happy, proud, and maybe a little sad that it was over. But I can relive the experience whenever I want to. All I have to do is pop in the CD of the show that Joe made for me.

If you would like to hear the show, you can too. Simply click here. This link will take you to mixcloud.com, where all of Joey Book’s shows are available to listen to.

Finally, my novel, Teaching Mysteries 201: The Strike, is available at Read Between the Lynes (for local folks) or here.

Thanks for stopping by Home Sweet Abbey. I hope you'll find something you enjoy. To learn more about me and my blog, visit my About the author page by clicking it in the menu at the top of this page.
Join 411 other followers