My right hand is bothering me this afternoon. It’s not sore, really. It’s more like it’s lonely.

I think my hand might be missing the Cubs championship ring that I was privileged to wear for a few moments this morning. Doesn’t it look good on my finger? 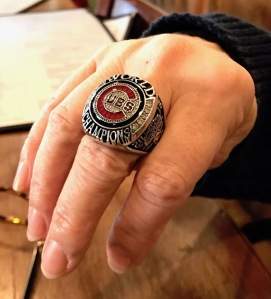 Let me back up and explain. Today was my monthly breakfast with several English department people I taught with before we all retired. One of them, Tony Casalino, undoubtedly has the coolest retirement job of anyone I know. He is also the proud owner of the ring.

Tony is in his eighth season working for the Chicago Cubs. He is currently a supervisor in guest services, having also worked as an usher and in ticketing. And he was thrilled to learn he would receive one of the 1908 rings that the Cubs gave out.

There are different categories of rings, Tony explained. The ones the players and front office people received are larger and heavier than his. They are adorned with 108 diamonds, along with rubies and sapphires. Tony’s ring, by comparison, has  21 cubic zirconia stones but no real gems.

Tony and his fellow staff members received their rings a few days after the players were given theirs. And that timing worked out well for him. On the night of the official players’ ring ceremony, Tony and his wife were in California for the birth of their second grandchild. It looks like baby Will is fated to be a Cubs fan too, since he was born at the moment the championship banners were being raised at Wrigley Field. Did I mention that Tony was a drama teacher? His whole family obviously has a flair for the dramatic.

Tony was back home in time to receive his ring. He said his supervisor gave him the box before a game but told him not to open it until after the game. Then Tony and his coworkers all saw their rings at the same time and celebrated with champagne.

Receiving his ring capped a magical time of celebrating the Cubs World Series victory. Tony also rode in the celebration parade in November and has this keepsake photo of himself with the trophy.

If you have been reading this blog for a while, you may think that you have seen the name Casalino before. Last year I wrote about Tony’s son, James Casalino, the proud dad of baby Will and his older sister, Hannah. James is the mechanical engineer who headed up the team that designed and constructed the set for the halftime shows of five Super Bowls.

If you would like to take another look at that post, you will find it here. It still holds the record for the most views of any of the 271 posts on my blog.