Hey, didn’t you used to be Miss Dierksen?

I occasionally hear that question—and give that reply—when I’m out and about in Woodstock, though not as often as I did a few years ago. Now in my 14th happy year of retirement, encounters with my former students have become less frequent. But that makes them all the more fun when they do occur.

Before I retired, I took for granted the presence of former students in my life. Most teachers who live in the same town where they work, especially one the size of Woodstock, get used to running into students every time they step out of their homes. The odds of that happening are pretty high here.

Let’s do the math. I taught five classes a day for 25 years at Woodstock High School. We’ll say an average class size was 25 students, though really it was closer to 30. In the English department, we had different courses each semester so multiply 25 x 5 x 2 x25. That’s 6250. Then, add in the 900 or so kids I taught in my seven years at Northwood Junior High. We’re looking at more than 7,000 former students. Keep in mind that when I began teaching in 1970, the population of Woodstock was around 10,000. Now we are just a few souls short of 25,000.

Here at Maples at the Sonatas, where we have around 100 residents, the trend continues. My neighbors include Kirk and Tammy, two former students; and Kaz and Bob, two former colleagues. I also have seven neighbors whom I met at parent-teacher conferences when I taught their kids, as well as two neighbors who are the grandmothers of former students.

My former “kids” now range in age from 28 to 63. And they are literally everywhere. They wait on me in restaurants, do bodywork on my car, seal coat my driveway, check me out in stores and the library, cat sit when I go away, serve me communion at church. My boss at my retirement job was a former student. And a former student drew up my will. Two times, when I was in car accidents, they were the paramedics who responded to the scene, one time attaching monitors to my chest in the ambulance.

I have made peace with this loss of privacy over the years. It’s a minor price to pay for that moment of recognition that passes between teacher and student. It’s a moment made sweet by a sense of camaraderie and the joy of sharing memories of very good times.

Time and again, I end up happy that of all the careers I could have had, I ended up being Miss Dierksen. 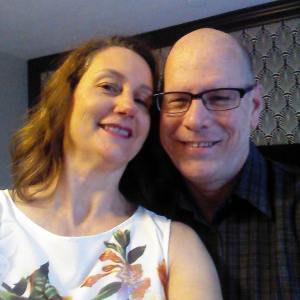 One more thing before I end. This is Steve and Beth, both former students whom I ran into on Saturday. They were having lunch at a local restaurant when I walked in with my 95-year-old mother and a 90-year-old former neighbor. We chatted a little, and it was great seeing them again. That would have been enough.

But when it was time for the check, our waitress said that Steve and Beth had paid for all of our meals. This was the most recent in a long list of kindnesses from my “kids.”